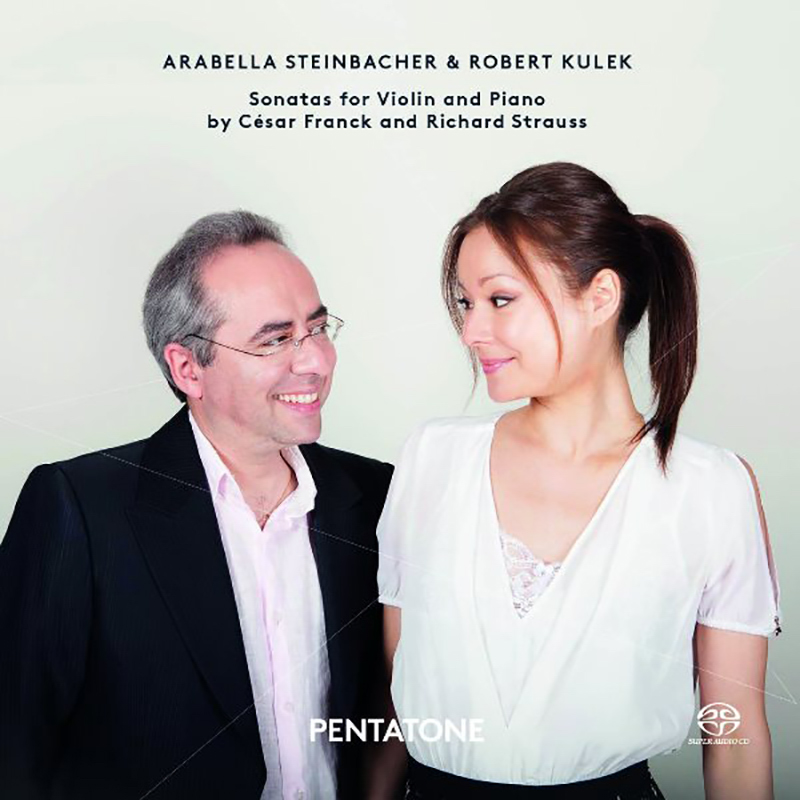 Baarn, The Netherlands, 3 September 2014- Violinist Arabella Steinbacher and pianist Robert Kulek continue their great collaboration with a new PENTATONE release, the recording of César Franck’s Sonata for Piano and Violin in A, which joins Richard Strauss’ Sonata for Violin and Piano in E-flat, Op. 18. While Franck’s violin sonata is epic in character, Strauss’ work is full of jovial energy, hope and anticipation. This fusion of elements brilliantly demonstrates the synergy between Steinbacher and Kulek, something we have witnessed during their recital performances over the past few years.

Needless to say, both artists possess superb technique. Steinbacher demonstrates her delicate yet fiery touch, most notably in the robust Franck score, while Kulek plays with resolute intonation, steadfast tempo, and broad dynamics.

As exquisite as the performance is, one surely cannot overlook the role of PENTATONE’s recording partner Polyhymnia, whose first-rate recording and engineering techniques have allowed this release to stay true to the rich and wide sound that are PENTATONE’s trademarks.

This release would undeniably make a solid addition to your collection and mark Strauss’ 150th birthday anniversary this year.

The CD is available worldwide from 1 September 2014.

Violinist Arabella Steinbacher has firmly established herself as one of today’s leading violinists on the international concert scene, performing with the world’s major orchestras.

Born in Munich in 1981, Arabella Steinbacher began studying the violin at the age of three. At nine, she became Ana Chumachenko’s youngest violin student at the Munich Academy of Music. In 2001 Ms. Steinbacher won a sponsorship prize from the Free State of Bavaria and was awarded a scholarship from the Anne-Sophie Mutter Foundation. Her recording honours include the Choc du Mois from Le Monde de la Musique, two ECHO Klassik Awards, two German Record Critics’ Awards, and the Editor’s Choice Award from Gramophone magazine. Ms. Steinbacher currently plays the "Booth" Stradivari (1716) generously provided by the Nippon Music Foundation.

Thanks to his versatility as a collaborative pianist, with a repertoire ranging from Bach to Ligeti, Robert Kulek regularly performs with some of the foremost instrumentalists of today, including Nikolaj Znaider, Arabella Steinbacher, Kyung-Wha Chung, Daniel Mueller- Schott, Augustin Hadelich and Simone Lamsma. He has also worked with such distinguished musicians as Gil Shaham, Julia Fischer, Julian Rachlin, Viviane Hagner, Shmuel Ashkenazi and Alisa Weilerstein, as well as the Jerusalem, Vogler and Aviv Quartets.

Recognition for his recordings includes the Edison nomination for a French sonata recorded with cellist Daniel Mueller-Schott, 5-star reviews in BBC Music Magazine and Diapason for a recording of the 3 Brahms sonatas with  violinist Arabella Steinbacher, and a high critical acclaim for a recital disc released in Asia in May 2013 with violinist Ye-Eun Choi.

Robert Kulek began his musical education at Mannes College of Music in New York with Elena Leonova, continuing to the Guildhall School of Music and Drama in London with Joan Havill. He subsequently went on to Yale University in New Haven to study with Boris Berman and Claude Frank, and earned a degree in Performance. Robert Kulek is a faculty member of the Conservatory of Music in Cologne, Germany where he teaches chamber music.