Piega and Auralic focus days at Musik-Magazinet in Bergen - Norway.

Musikk-Magazinet in Bergen had a visit from the Swiss speaker manufacturer Piega and the Chinese electronics manufacturer Auralic the end of the first week in March. We had two visits - read our report. 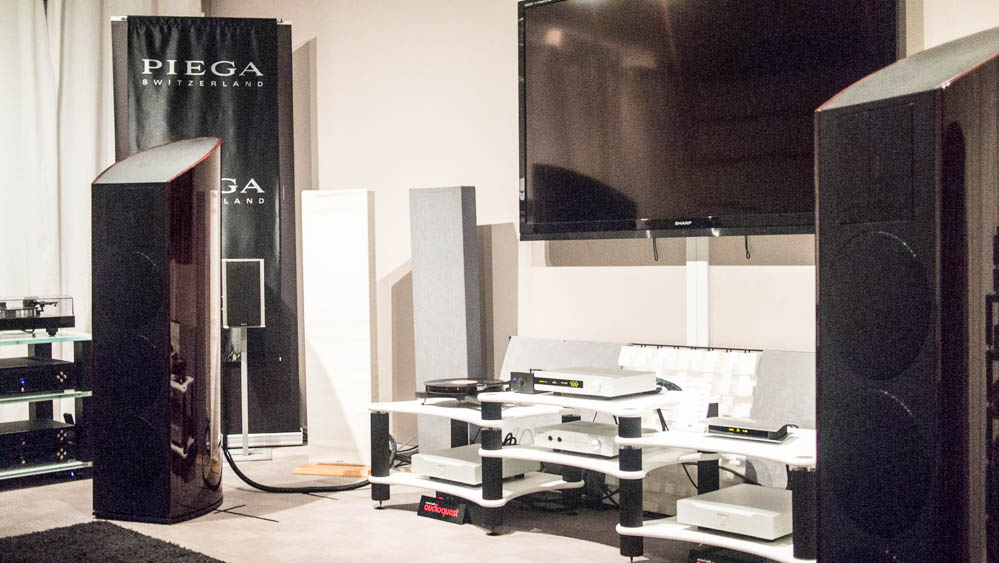 Martin in the store Musik-Magazinet in Logen in is an enterprising young man. During quite a short time he has been able to establish several events for HiFi enthusiasts in Bergen. Last autumn Mono AS an event that we visited and wrote about here , and this time it was the distributor Duet Audio which had an event with two of their agencies. When Martin called and asked Erik Becklund in Duet if he could be there, Erik called as well the representatives of both the two manufacturers who were in the fire. Both Piega and AURALiC are now products that Musik-Magazinet has a wide assortment from in the traditional store, and two of the fundamental pillars of Duet Audio. 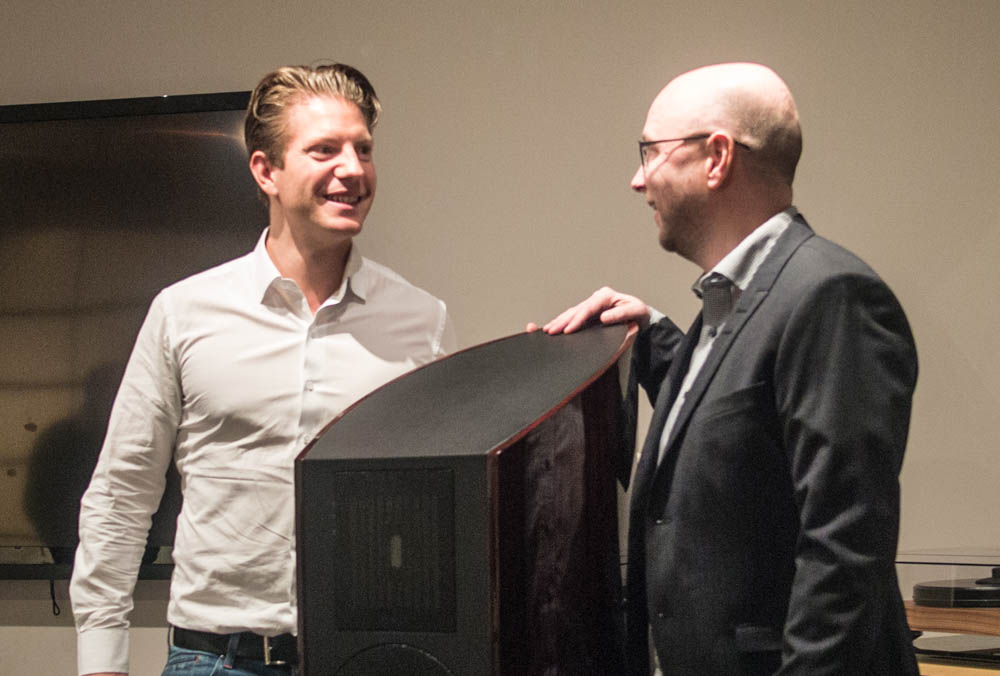 Piega is a 30 year old speaker manufacturer based in Zurich in Switzerland. Manuel Greiner is export manager, member of the executive bard,  and son of the founder of this manufacturer who started his career with speakers who Maunel claimed sounded very good, but didn`t have the loks. They soon took a grip with the design, and aluminium cabinets was early a trademark of Piega`s speakers. Coax and Premium are series that have pure aluminum enclosures, a material that has excellent resonance characteristics. 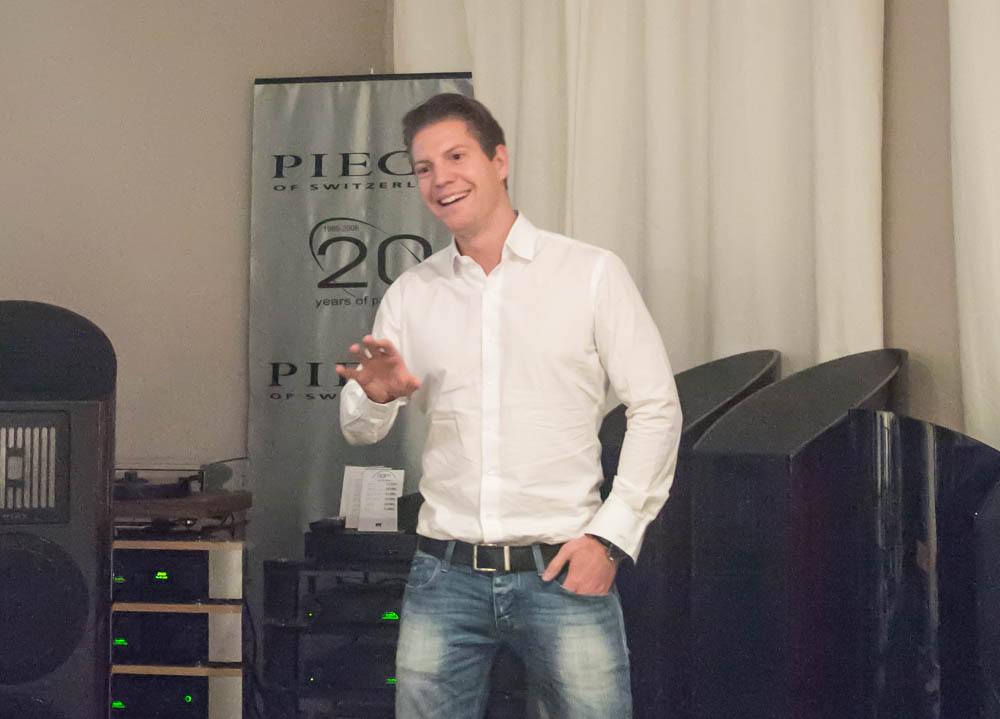 An engaged Maunuel Greiner tells about the Piega speakers.

At the focus of the main part of the event which was Thursday evening, was the top model in the new Classic Line launched a short time ago. Here's aluminum replaced by wood, and top model 80.2 that was played on this night was a very well-grown structure. In top sits the Coax element consisting of a ribbon tweeter and a midrange element placed on the same axis in all three directions, and which is repeated in other models from Piega. In top model in the Classic series is this Coax group assisted by two ten-inches playing bass down to 22Hz. 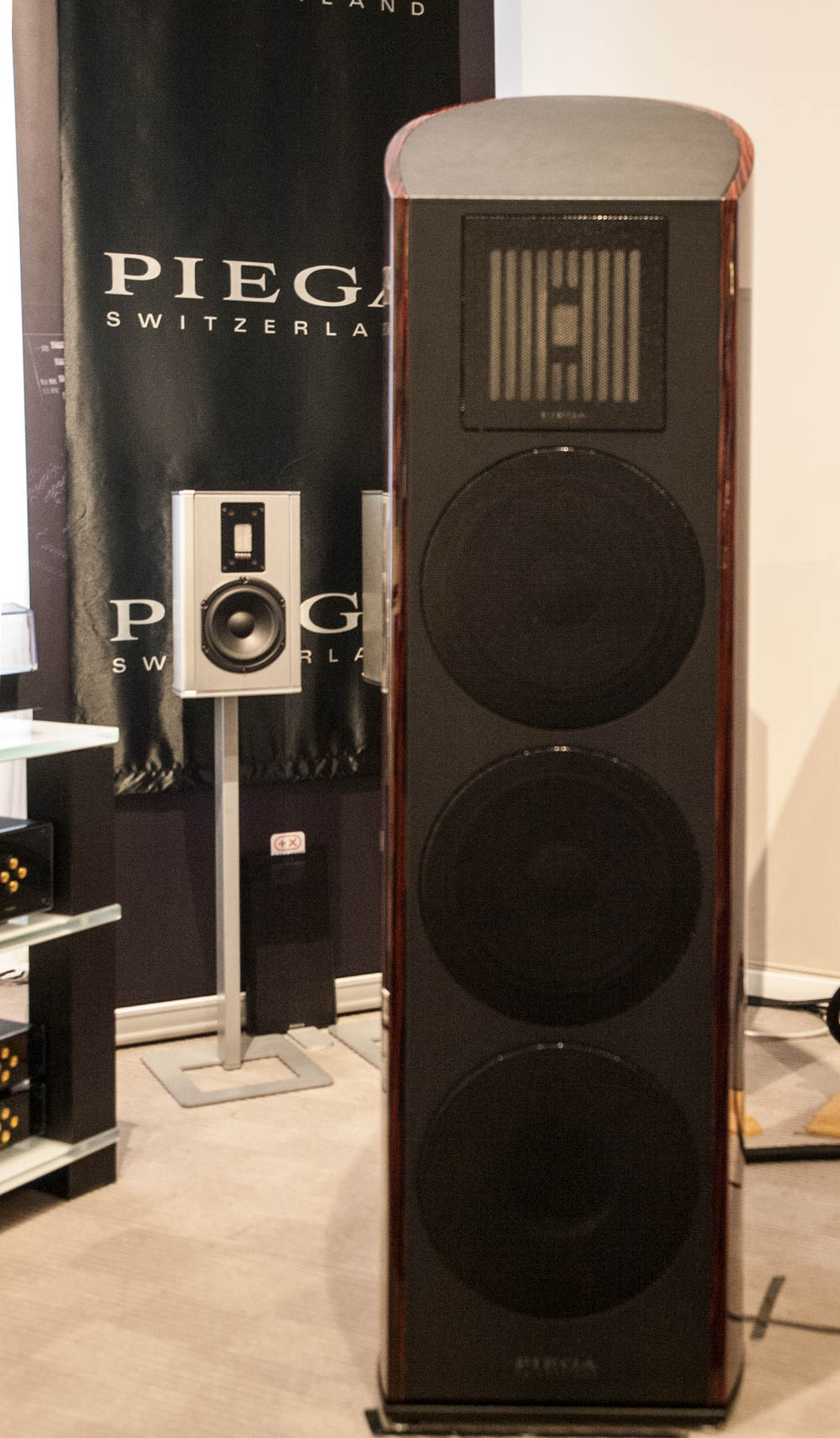 It was a pretty formidable sound being served by Classic 80.2, when they played together with a complete setup with electronics from AURALiC. Bass foundation was figuratively rock solid, and it was obvious that practically all the audible range was covered. Whilst it was a tremendous transparency, dynamics, and a large stereo image that was drawn. Lou Reed took a Walk further on the Wild side than I've ever heard before, and Lars Danielsson played almost as present as when he played live with his wife Cæcilie Nordby at a restaurant on Bispebjerg for Scandinavian Hifi Press autumn 2011.

For me anyway the peak experience was when a visitor started streaming Spanish Key from Miles Davis's legendary and at the time controversial album Bitches Brew. This album I have despite my clear digital inclinations yet to hear better than the double vinyl album purchased for approximately 40 years ago. But then a 24/96 version of HD tracks played spectacularly and with a tremendous dynamism. From what I understand originated this remixed version from the 4-CD box where it was taken the very controversial choice to remix Teo Macero's magical production from 69-70 without his approval, and I simply do not think it sounds very good on CD. And here it is thus perfrorms all time high, and that by a good margin. Now this was so far a derailment, but it illustrates the supreme achievement this setup is able to perform. In a way I get associations from my experience with Tannoy DC10T - only with even more of the good things that impressed me with these Tannoy speakers, when playing the combination of Piega 80.2 and AURALiC. And it is quite interesting that there are some common features between DC10T and 80.2. Both have a kind of Dual Concentric / Coax concept, and also has 10-inches drives in the bass. And then there's always like that in a brief meeting that it becomes superficial impression without the possibility of more thorough comparisons with different reference components to determine if it is setup as a whole who have equal credit for the success, or if individual components have greater share of the credit than others . 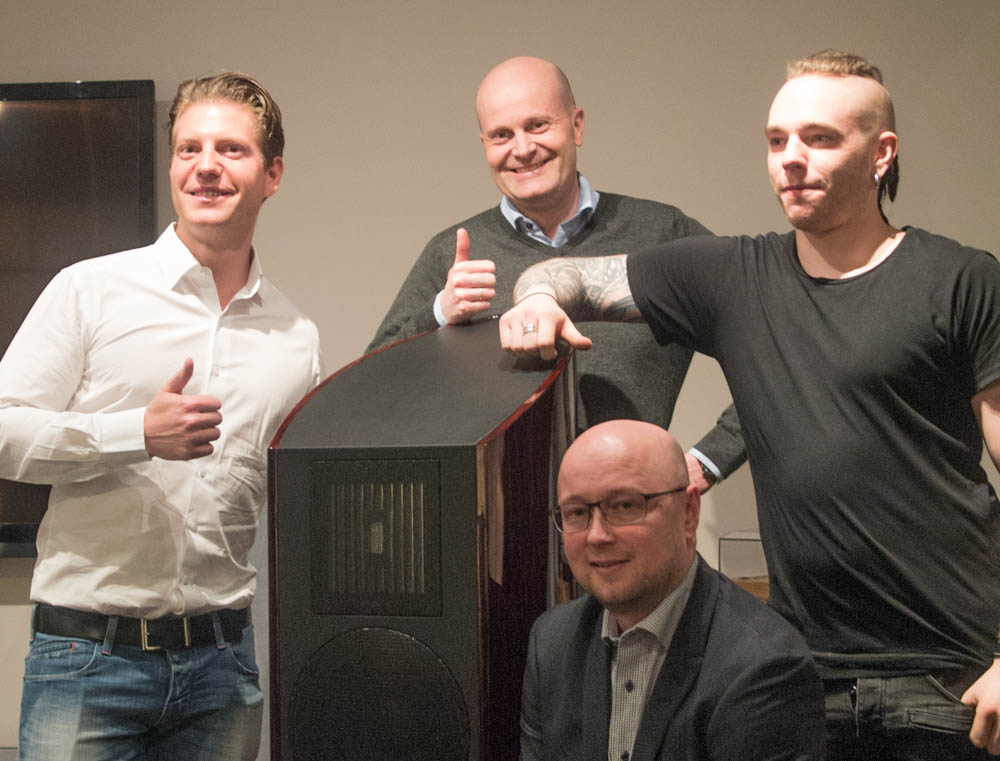 A writer returns to the scene.

On Thursday, it was natural enough Piega who received the main bulk of attention, since Manuel Greiner was responsible for the initial presentation. This directing was a natural consequence of AURALiC`s representative did not arrive until Friday. And since since AURALiC is a particularly exciting manufacturer that has received a lot of attention for their Aries streamers currently, I used the opportunity to book an appointment with Christian Rechenbach Saturday morning. He is as the name suggests, a German living in a small town quite near the Dutch border. He is AURALiC`s representative for Europe, and exhibits a large commitment to product lines, which otherwise is entirely developed and produced in China. 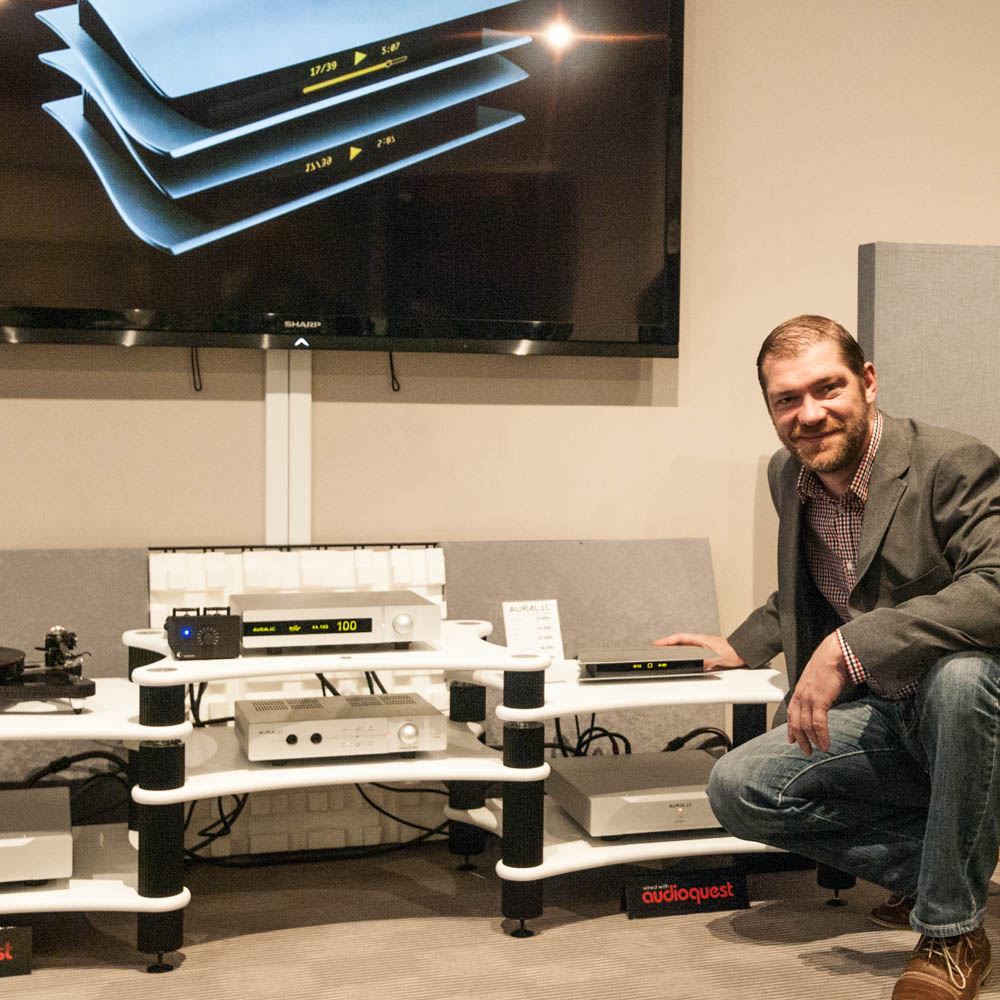 Christian Rechenbach beside the products from AURALiC

AURALiC Aries is a pure streamer without DAC, and is available in two versions. Aries is the most lavish edition, while Aries LE is a slightly less expensive version. No "Limited Edition" behind the letters, in other words. In the development of streaming concept AURALiC have redeveloped Linn`s Open-source DS.koncept. But Christian revealed that they also have been looking towards Sonos, because of ther renowned stability. AURALiC has developed their own APP called Lighting DS, an APP which incidentally works on Linn's DS streamers as well. Currently this APP only work on the iPad, but it is also a variant for Android and iPhone just around the corner, and eventually also for PC.

The two main aspects that distinguish Aries and Aries LE is clock and power supply. The most expensive version has a much better power-supply than LE. There is also a much better clock that sits in Aires, one FemtoKlokke. Femto is a term that stands for 10 -15 and Aires has two independent FemtoClocks. Christian Rechenbach also underlines that the success of Aires and the DAC Vega has largely to do with timing of the digital music stream. And stability.

For FemtoClocks we find not only in Aires, but also in the HighEnd digital preamplifier AURALiC Vega . This is a pure digital preamplifier, and has no analog inputs or A / D converter. It upsamples all PCM based signals to 32bit / 1,5MHz(!) and FemtoClocks provide extreme accuracy, with jitter of max 82 Femtosecond (0.0082 picosecond). All HighRes formats are supported, including DSD 2.8 and 5.6.

Users can fine-tune the sound with various filters. It is also selectable different modes on the clock, where a most extreme Exact-mode has characteristics that make the clock requires some amount of heating before it works stable. Christian tells of episodes where the clock has fallen out as a result of a window was opened. In his private setup he has his device placed in a rack where temperaturan always is sufficient for being able to function in Exact-mode. But Exact-mode is thus a geek mode, which only recommended for those who want the ultimate perfomance, despite its practical limitations and risk of instability.

Since Vega is a pure digital preamp they also have analog preamplifier in the program. AURALiC Taurus Pre preamp, while a fairly equal unit called Taurus MKII is a headphone amplifier with a preamp function.

As the last link in the chain we find the mono blocks AURALiC Merak . Class-D amplifiers that provide over 200W into 8 ohms and 400w at 4 ohms.

Musik-Magazinet has the entire series from AURALiC in their range.

More in this category: « Philips CD 304 and 304 MkII - are the antique CD-players still best? Linn SPACE Optimisation - room correction on Scottish trial run »
back to top