For many years I have tried to collect old pressings of magnificent recordings. I have thought that the old pressings were better than those who came later, simply because they are created by master tapes that were far fresher when they were new, than what they have been gradually. But, here's a frightening experience for us who have collected on the old ones for many years .. About original pressings. 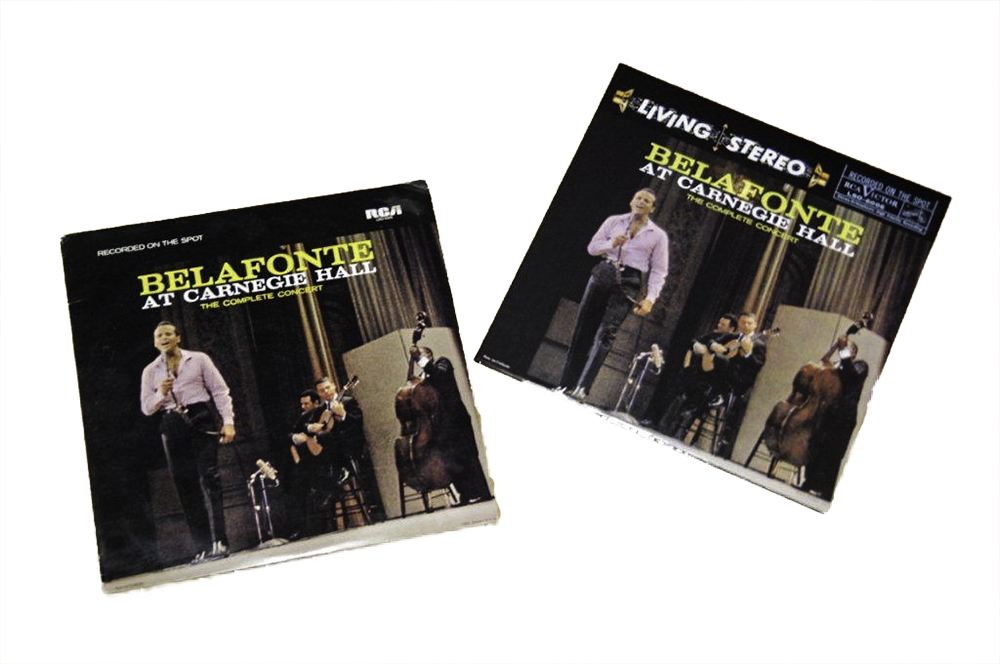 One of my definitive favorite records, which also must be counted among the world's best live recordings of male voice, is Harry Belafonte in Carnige Hall. Back in 1959 things happened in this concert hall which was registered so perfect that today we can get fantastic realism when we play this in two channels.

I received this double-LP in a new edition from PM audio. I always try have an open mind, but some thoughts did nevertheless occure; is this an emergency, so we still have to stick to the ancient vinyl pressings for optimal sound, or we can we buy reprints and get the same sound quality? My starting point has thus been that the old pressing were the best so far in the cases I have managed to make comparisons, when I've seen the ancient pressings and new releases.

Theoretically, it is difficult to be decided this. Even though vinyl is old and might be tired, at least transfer from tape recordings was done when tje tape was fresh. Today we get albeit  first class quality vinyl. This can be generated in a special edition without adding pigment, in thick editions on both 200 grams, and perhaps even thicker. One may create half speed engravings and make other special production, but at the end of the day, it is not possible getting away from the fact that the master tape grows one year olderfror each year. Magnetic tapes are loosing quality over time. Some tapes are completely destroyed.

But the decomposition process is not equal for all productions. Even though parts of the information on some recordings have disappeared, there are others which seem to be completely on par. 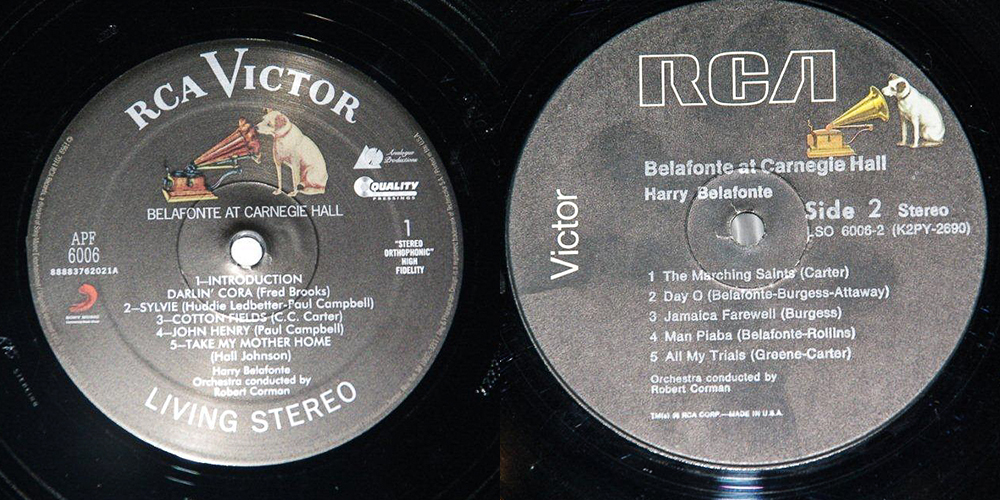 Before I play the record, I had to take a look at the cover and the shape of the album. This must be said to be getting a really luxury toiuch. Labels are in color, where my edition has black & white. And the cover is also designed with increased gloss. Even though my old edition is very nicely processed, the new one is much more elegant. You also see the quality of the vinyl. The edge is polished, like the old vinyl discs from the late 50 century was originally. Here are things done as well as you expect, even compared ti the expoectations for a sowhat expensive record. 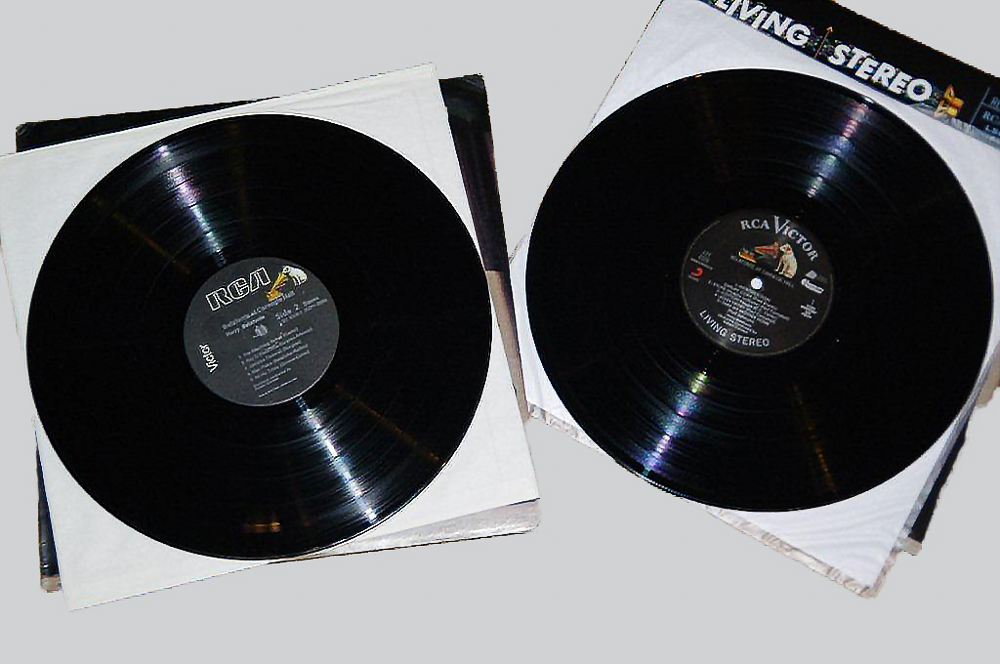 You are able to hear how Belafonte sing, so precisely reproduced that you are never in doubt where the man is placed. You get right all about his voice, and also how his backing orchestra is on stage. And you hear the hall, to one of the worlds great concert halls (that never more can be experienced in this way, as it has been rebuilt). This album is a time machine, or at least a time witness documenting fully how well it could be done in stereo's childhood. Macro dynamics there is not much of, except from some trumpet and percussion, but ability of nuancing at this and everything else, micro dynamics, makes this an album that must be on the short list to all soundfreaks.

The new version looks very costly, with shining, glossy finish on the cover, and anti-static inner bag. We can also see with very small letters something that separates it from my edition, " Analogue Productions and " Quality Record Pressings , in addition to "Sony", that must have acquired the rights to this niche product.

Labels are a direct copy of first edition, with color image of Nipper - the dog which is the symbol for "His Masters Voice" and the phonograph. And we must say something about vinyl quality, very thick and 200 grams. I have a few other Analog Productions at the same quality level, and it is obvious that they have not been saving anything. What, then about the original edition?

I am one of them (few?) who has an old pressing. It is engraved A1 DD K2PY 2691 310, but this is telling me very little. RCA's a good documented company, especially within classical recording. And within the classical there are good explanations on what to look for when it comes to numbers and labels from RCA, where "Shaded Dog" and "White Dog" is the most valuable. But this is pop music from the fifties, and has actually not so high status between collectors, a socalled "Black Dog" -pressing, which I have not been managed to find featured within my other sources.

Anyway, I have owned this album since early eighties, when I bought her from the United States. She was quite distinct old, albeit well taken care of. The side edge of the record is not polished, like most American records from the 50`s were. The cover is double, with matt surface and of high quality, so I guess it is a pressing from the 60`s. The dog on the label, nipper, in black & white socalled "White Dog" one would  have said if it was talk of classical music at RCA.

Surface sound is anyway not a problem. My old pressing has very little "record noice" and you realise immediately that the record has been used cautiously by both me and previously owner(s). But when I make direct comparison the new QRP edition, noise is completely absent on the new pressing. In that way even the smallest dynamic nuances are challenged and razor sharp. Furthermore, we have sound balance that is very natural, without the slightest hint of transistorized "shine". My old pressing is extremely good at this, but the new pressing is not behind in any parameter.

The last aspect I listened for, was how precisely the locations of performers, and how naturally the acoustics are reproduced. Here the way the audience is engaged is very obvious, and even if you can not exactly hear the audience behind you in a stereo reproduction, and even though I am all too young to have ever heard Carnegie before the rebuilding, this is an almost magical realism. And here something happened. Indeed I can hear that the new edition appears to be an notch better than my old original. Not the dramatic difference, but something clearer. We hear a bit further when Belafonte turns away from tiny microphone when he sings, and how he render razor-sharp on stage. 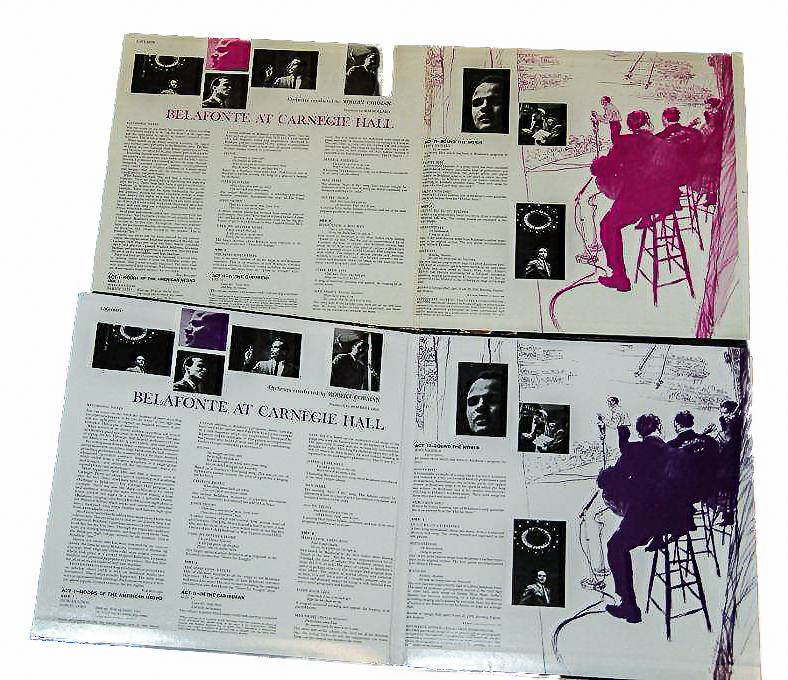 There is an explanation on why this "modern" recording is so special.

RCA had a pretty special setup the time whan mono records were (at least) as frequent as stereo records. It was expensive, and not always technically possible, to produce both stereo and mono recording. Therefore RCA used to record three channels . Typical right / left channel with each their microphone, but additionally a center microphone, which should be the basis for mono editions. These three tracks were made by a special tape recorder with three tracks, and was thus actually the real mastertape, which later was copied to a one-track mono edition, and a two-track stereo edition, which also after hours became my first edition. But now Analogue Productions has gained access to the Actual mastertape, the three soundtracks. This was done with many of RCA`s recordings, and several of the classical are released as three-track SACD recordings, where those with center channel and 5.1 systems can get absolutely everything of what is on the tape.

Vinyl Record can not  palyback more than two channels, right and left, but when the before almost unplayed tape finally getting to show its content again, it is thus noticeably better sound than what I have experienced before.

So this is something that can just compete with anything - it is the standard for how well a man's voice can be reproduced analogue.

The distributer of this album is PM Audio, costing around 700,- NOK. It is worth it.